Ultra-fast, totally protected and ultra-modern. This combination is so good for a car that it almost sounds unreal. However, it turns out that  the capabilities of car designers  are gaining new heights.

The next one is  Audi RS7 Sportback.  So far, this is the fastest armored car on the road, developing  325 km / h.

The car has an  tuning package from APR , which increases the power of the engine and the vehicle raises  100 km / h in 3 seconds.  The market price of the jewelry on four tires is about  200 thousand dollars , half more than the standard model. 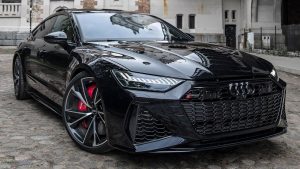 What levels of protection are there?

Until recently armored car was synonymous with a heavy and less maneuverable machine. Audi RS7 Sportback Add Armor manages to refute these definitions. When creating the car,  a number of innovative improvements  have been made to provide it with the necessary speed, combined with a sufficiently high class of protection.

The armor of the car adds less than  100 kg  to the weight without compromising the degree of protection. The car corresponds to  level B4,  ie. withstands against firearms such as  Magnum 44 caliber.

The extras don’t stop there, as the  front bumper is also reinforced, as is the radiator , so that various obstacles on the road, such as a brick fence, can be overcome without any problems.

Tires have also been considered that can continue to move even after a possible shooting. The model is equipped with  Pirelli P Zero Run Flat,  which can be fired with a rifle and they can rotate on the road for another  at least up to 50 kilometers.

And with a smoke screen from the outside,  the system of mounted cameras that provide 360-degree surveillance  even at night comes to the rescue. Sensors for detecting mines and other explosive devices are available.

The armored Audi RS7 Sportback has  additional protections that provide direct safety to the passengers in the car . Such an extra is the current that can be released on the doors if someone tries to open them from the outside.

Along with the electroshock protection, another  unpleasant surprise for potential attackers is the spicy spray , which can be activated if necessary to be sprayed around the car.

The possibility of  activation of smoke,  external sound and dazzling headlights are other options available in the new model. If the car is attacked from the outside, oxygen masks  are mounted inside each passenger compartment  and air filtration is activated.

In emergencies, the car has a factory suitcase. Its contents include a box with a biometric opening, which is for weapons. In the passenger compartment  the automatic dialing telephone can send an emergency signal  to the police and the Emergency Service.

Drone detection can even be  avoided  by giving the car another frequency jamming system. 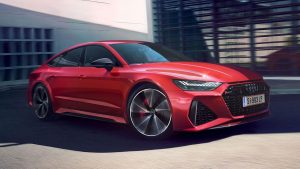 The technology of the fastest armored car

The features of the Audi RS7 Sportback, even in armored form,  launch it into the group of fast cars. tank.

Power is definitely not lacking in the Audi RS7 Sportback with an tuning package from the APR, after accelerating  from 0 to 100 km / h in 3 seconds on a straight section,  thus winning the prize for  the fastest armored car on the road.

Outside, the four-tire machine is  a modern city car with four doors.  However, connoisseurs will notice the wide lines of the bodies, the massive tires and the rear spoiler, which emit the “beast”. In fact, mechanics prove with this model that  they can “dress” almost any car with armor  and launch it into a whole new dimension.

The upgraded Audi RS7 Sportback impresses not only with its added extras, but also purely design. Inside  the car also looks extremely comfortable.  The seats are comfortable and elegant, their model is typically sporty.

The passenger compartment is elegant with leather upholstery, tailored shapes to the curves of the human body,  provided backrests and comfortable seat belts.

Besides being beautiful , this car offers exceptional security for the driver and his companions . The car’s computer helps the driver to drive more smoothly and confidently. All available sensors are helpful, which can  warn in time of unforeseen dangers on the road , for changing the pavement and for safe movement among other vehicles on the road.

In this way  the risk of unpleasant accidents is minimized  due to human error or surprises. Voice commands work in parallel with the touch of certain functions on the dashboard, which makes navigation easier and  driving becomes a real pleasure. 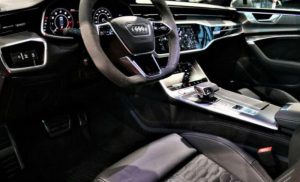 The unique Audi RS7 Sportback was presented for the first time at the  Frankfurt International Motor Show  as a multifunctional car with exceptional comfort and a series of extras.

Audi  is expected to promote the sporty status of the  RS7  in the next  2022 year with a new  RS Design package.

The model is also available with  carbon fiber lining.  There will be surprises in the suspension. A novelty is  Dynamic Ride Control,  which aims to improve the handling of the car. It is also claimed that this  reduces body friction while driving,  especially when cornering and off-road.

But even without all this  the rolled version of the Audi RS7 Sportback  still remains unsurpassed chic on the road. All the extras turn it into a super vehicle like in the movies about the legendary  James Bond.