The first armored car in the world

Home>Blog of Brone.bg>The first armored car in the world
Previous Next

The first armored car in the world

The protection of world leaders and VIPs is a serious business, and there are only a few companies with specialized engineering skills in the world which manufacture armored security vehicles. 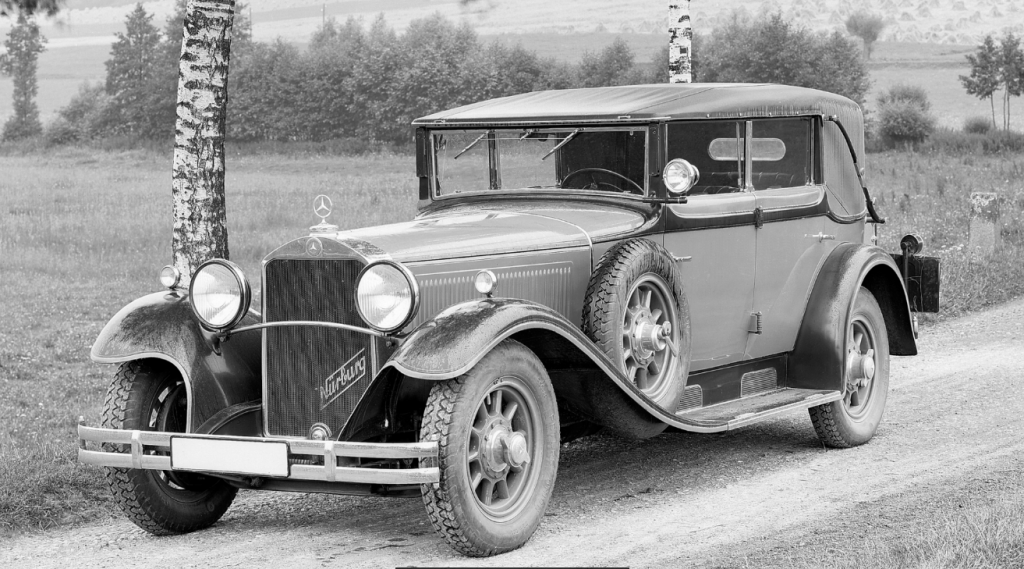 The beginning was set in 1928 when the first armored car in the world, Mercedes-Benz Nürburg 460 (W08), from the Mercedes-Benz production line was launched.

The luxury limousine is named “Nürnburg” as a reference to the Nürburgring race track which was opened only one year earlier (1927). From Mercedes give this name to the vehicle because of its durability, as the 460 model can travel a distance of 20,000 kilometers in 13 days (something unseen for that time).

Unfortunately, there is no detailed documentation on the protective equipment of the world’s first armored vehicle but it is known to have been owned by the Japanese Emperor Hirohito.

In 1930 Mercedes-Benz manufactures the world’s first Nürburg 460 PopeMobile. The PopeMobile is manufactured as a gift from Daimler Benz specially for Pope Pius XI. The armored limousine was extremely comfortable, and what impresses even today is the rear-mounted throne in the passenger compartment.

Today, the first ever PopeMobil is among the 10 most expensive cars in the world and is stored in the Vatican City.

In 1931, Mercedes-Benz produced a limited series of Pullman armored limousines for VIPs and royals.

Pullman from 1931 was armored with sliding steel plates which shield the windows from the inside. The windscreen is also protected by a folding steel plate with only a small observation slit provided for the driver to see through when it was in use. As for the passengers, a roof-mounted periscope allowed them to survey their surroundings when the protective plates were deployed.

The production of the Nürburg 460 (W08) continues until 1933 after which the elegant and luxurious Pullman version, available from 1934 to 1939 as the Type 500, comes out on the world stage. Pullman is a sedan and is one of the most popular versions of the eight-cylinder Nürburg.

After this big boom in the production of armored cars for the VIPs, Mercedes stopped production for 70 whole years.

After the seventy-year delay, the company resumed its work and set up a special department that works even to this day. The department develops and builds several hundred armored vehicles of the Pullman Guard type per year based on the Mercedes S, E, G models. 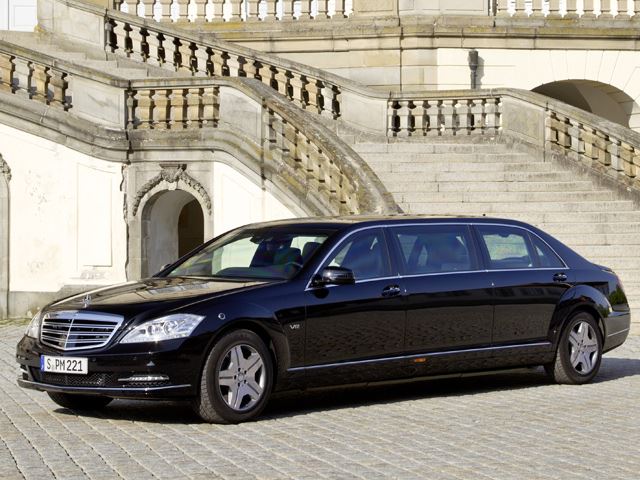 Their latest development which ranks among the most expensive armored rental cars is the Mercedes S 600 Pullman Guard.

The protection that is applied in the armored limousine is carefully thought out and adapted to the special circumstances that force it. The rear bumper follows the silhouette and distinctive character of the limousines driven by drivers. The interesting thing here is that the rear glass is not armored, instead a steel barrier is located behind the headrests. On the outside, the special protection is almost imperceptible.

The security features in the limousine body are made of special steel and are mounted in the gaps between the body structure and the outer shell. Specially made aramid and PE elements provide additional protection. Intelligent overlapping systems at particularly critical points provide a complete ballistic protection.

The combination of all these components guarantees the passengers a highly efficient shielded space, complete protection against explosive devices and attacks of all kinds of ballistic weapons.

Another leading force in armored cars is the US and we cannot bypass its contribution to their production.

The first time an armored car entered the presidential fleet was in 1939 and was produced specifically for President Frank Roosevelt. 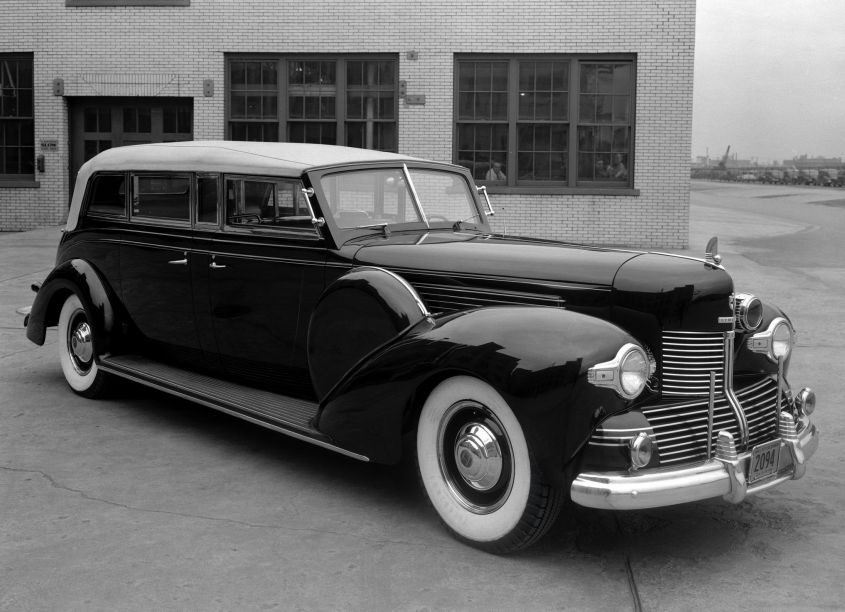 Sunshine Special is created with confidence and comfort. Security is paramount because Franklin Roosevelt has already survived an attempted murder in 1933 when giving a speech from the Buick cabriolet back seat. Comfort was important since Roosevelt had to be able to get in and out of the car while preserving presidential dignity.

The Sunshine Special is on a Lincoln K-Series powered by an V-12 engine, а and the armored limousine is built by the the coach builder Brunn in Buffalo, New York. In 1942, the car was updated with a new front end. In the same year, various armored elements and improved glass were added.

After Roosevelt’s death in 1945, Sunshine Special remained in the presidential fleet until 1950. The presidential car is now part of the Henry Ford Museum collection in Dearborn, Michigan.

Sunshine Special is among the most luxurious and retro rental cars in the world. 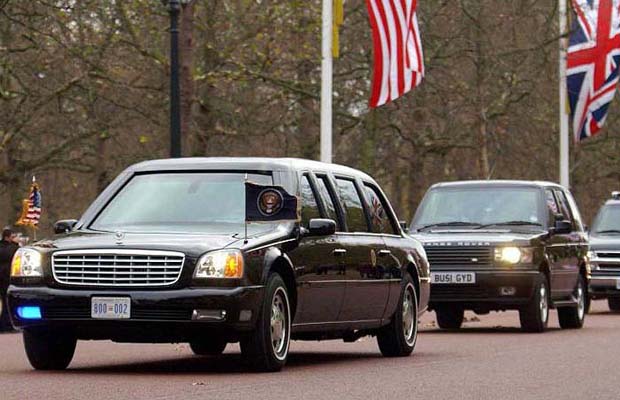 Bush is a Cadillac admirer and during both of his mandates he changed several Cadillacs. The Cadillac Deville, in which Bush was riding, has a weight of 8 tons manual installation, under its lid an 8-liter V-8 engine with capacity of 520 hp is mounted. The luxury vehicle is equipped with infrared cameras to scan the road. The thermal signature of all objects in front of the vehicle turns into a view that is projected onto the inside of the windscreen.

According to unconfirmed information, the presidential Cadillac, apart from 5-inch-thick armored doors and bulletproof glass so thick it blocks out parts of the light spectrum, has a sealed passenger compartment with its own air supply, a big 454-cubic-inch truck engine so that the monster can go through all obstacles without any problems.

Today Cadillac Deville is among the most expensive luxury and retro rental cars and enjoys great demand among luxury car lovers.

Cadillac One or better known as “Obama’s Beast”ът на Обама” befittingly ranks among the 10 most expensive cars in the world.

Obama’s armored limousine is not much bigger than Bush’s cadillacs but it’s obviously much heavier. Presidential limousine information is kept secret but from what can be estimated from the photos, experts say the limousine is running on Goodyear Regional RHS tires – these are tires normally reserved for medium and heavy trucks, and the frame and propulsion are from GM’s “TopKick”. According to the rumors, the Cadillac One is powered by diesel (if it is true, then this is the first armored diesel car), the engine is either the well-known 6.6-liter V8 Duramax turbodiesel or a more powerful diesel for large commercial trucks.

Again, according to rumors, the limousine can withstand any attack, including biochemical and chemical weapons. The windows are 13 cm thick and can withstand any firearms, and the tires can continue to move even after a direct hit.