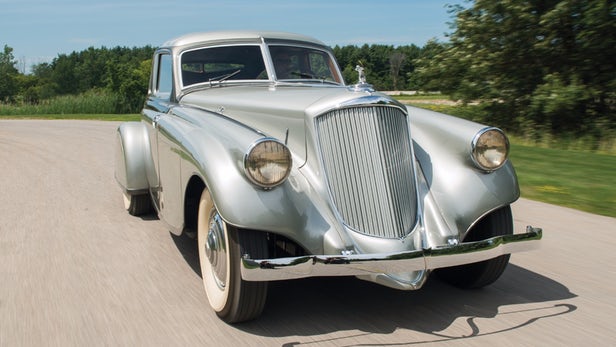 The “Silver arrow” masterpiece of Pierce-Arrow

The ranking of the most impressive cars from the 1930s may have to start with the “Silver Arrow” of the American company Pierce-Arrow. Of the 5 cars sold at the time, there are three left today, and one of them was bought for $ 3,740,000 in 2015.

The model, with its first presentation at the Chicago World Exposition in 1939, made a furor with its bold, untraditional solutions – in terms of construction and design. A few months later, at the prestigious New York Exhibition, “Silver Arrow” was made “Car of the Year”.

The car definitely expresses the demand for the “car of the future” at that time. Sedan, 4 doors. The power is amazing for that time – 175 hp. , which allows a speed of 185 km/h. The engine is a 12-cylinder, as between the cylinders there is an angle of 80 degrees, the crankshaft has bearings at 7 points. The suspension is completely independent, the drum brakes on both axles are strengthened.

The appearance of the car was quite unusual for that time, different from the concept of the rest of the retro cars from the 1930s. The car has a long aerodynamic, polished aluminum body. The elongated shape is combined with a bevelled roof in the back side, headlights are of the pontoon type. The grid is lightweight and not as massive as usual.

Between the doors and the front wheels there are niches for spare tires, the rear wheels are almost hidden from the rear fender. The interior was very luxurious for the time. The interior was of high-quality suede and wood, as various extras and consumables were available for the passengers in mounted elements on the passenger compartment.

In 1938, the company went bankrupt, but before that four more cars in addition to the exhibition model were produced. There are some changes in them, but this makes them even more unique. Ultimately, being extremely rare and unique, today it definitely raises the price of the “Silver Arrows” of Pierce-Arrow as part of the world’s automotive history.

“Highway courier”or how to get ahead of time 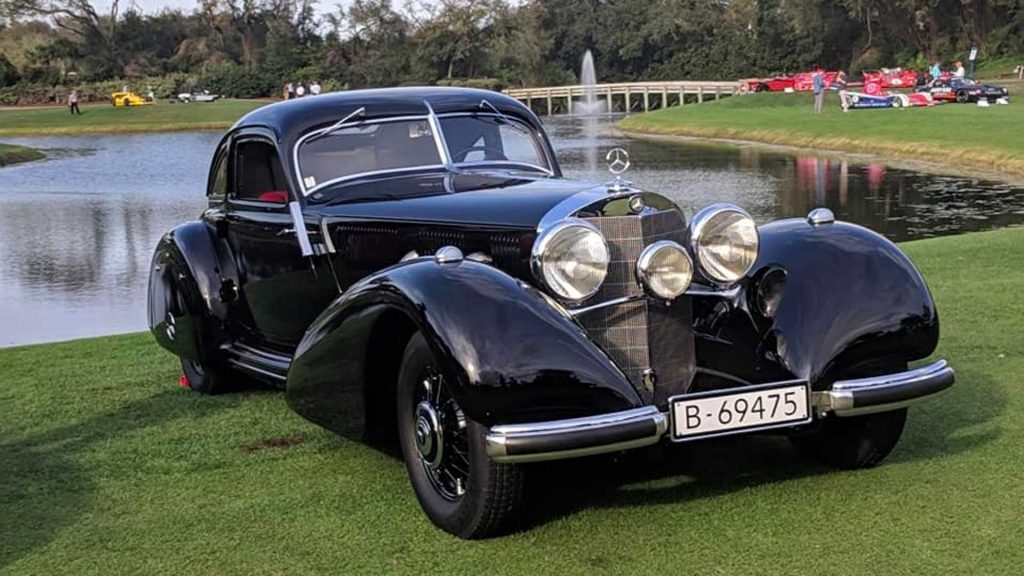 Another representative of the exceptionally interesting retro cars of the 1930s is the Highway Courier of Mercedes-Benz. This luxury model became a sensation even with its performance in 1934 at the Berlin Exhibition.

The Mercedes Autobahnkurier was a surprise to everyone, because Mercedes engineers – traditionally conservative, this time have broken the revolutionary corporate style of the company. The rigid shapes are heavily softened, and it is focused on aerodynamics.

Non-standard is the curving of the rear windows, closing the rear wheels in arches,as the body and overall design are not typical. In fact, the idea was far more advanced than the finalized version. The first sketches distinguish the cars with a lot of extravagance, particularly streamline shapes and a Hard Top Roof.

The appearance was so different from the traditional Mercedes cars that the company’s management rejected the offer. The compromise option was to preserve the corporate style of the front decorative part of the car and to introduce most of the other innovations. Either way, Autobahnkurier was recognized as the most beautiful car at that time, a vehicle that “got ahead of time“.

The idea of ​​the name is also interesting. In the 1930s, many roads were built in Germany, with one of the highways passing through the country. The name of the new car is precisely related to it and the idea of ​​mobility, speed, comfort and security lies in Mercedes-Benz’s “Highway Courier”.

Today, there are two cars left of Mercedes Autobahnkurier model, and in the 1960s the traces of one of these were lost. For both cars there are interesting versions related to Hitler. One is that the first car was donated by the Fuhrer of the Spanish eye surgeon professor Ignacio Barraquer, who saved the eyes of a senior German officer, valued by the dictator.

The  son of the surgeon denied this, and one of the next car owners says there is evidence that Professor Barraquer bought the car. Either way, it served faithfully to the professor on long trips to Africa and was the property of the family until 2004. It was then sold, completely renovated with the new technologies, and is now shown at museum exhibitions.

The other car claimed to have been given by Hitler to the Iranian monk Shah Mohammad-Reza in 1935. The shah gave it to his son in 1939. The car has not come out of Iran for a long time. The latest information about it is from the 1960s – the car was very well preserved and had a mileage of 10,000 kilometers. Then the track of the car is lost. 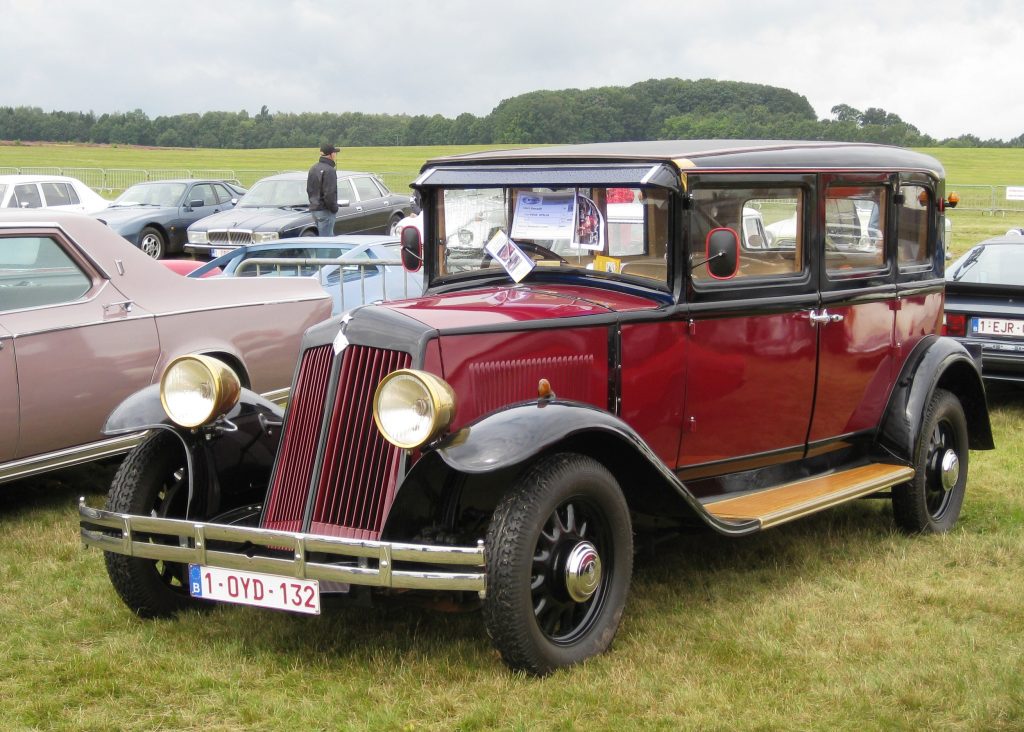 The list of car emblems in the development history in the 1930s can continue with the Renault Vivastella from 1932-33. This was a time of major changes to the Renault concept and introduced changes.

Modeling is simplified, with elegant emphasis on classic lines and a powerful but quiet engine. This elegance attracts artistic people with a taste that they can afford to buy the model. This car model of the 1930s has been owned, for example, by Henry Lumiere, one of the Lumiere brothers, thanks to which the world receives “moving pictures” – cinema. The car is preserved until the present day and is a unique piece in a museum.

The Bugatti Type 49 is also impressive. This series has produced 470 vehicles, which makes it also rare nowadays. These cars have built a reputation for very reliable machines. The car is described as having a “split personality” – perfect for urban and intercity travel and with a sports temperament at the same time.

When talking about automotive in the 1930s, the Alfa Romeo 8C 2900B Touring Berlinetta (1937) can not be missed. The name is related to the engine – a straight 8-cylinder, located under a narrow and long lid. The car was shown for the first time at the Berlin Exhibition in 1938, and the experts immediately gave it a very high rating. And there was a reason why – at a world show specializing in retro cars – Pebble Beach Concours d’Elegance 2018, the Alfa Romeo 8C 2900B Touring Berlinetta 1937 was chosen as the best car.

Lancia Astura should also be mentioned. This luxury car was produced from 1831 to 1938, and the interest in it by wealthy motorists was strong during all that time. Based on the “civic” model, sports versions have also been made. The development of Astura’s design was led by Giovanni Battista Farina, who is the founder of the legendary Pininfarina company for bodybuilding and design.