The armored cars of the heads of State

Home>Blog of Brone.bg>The armored cars of the heads of State
Previous Next

The armored cars of the heads of State

In developed countries,the vehicles of their leaders are of paramount importance.Special limousines are the first and last defense in the event of an attack while travelling and at the same time they represent the whole nation as they make the first impression upon each visit.

Which brands and models are preferred by the world leaders?

In September 2018,the Special services of the United States of America presented the new armored limousine, ordered specifically for the President Donald Trump before his inauguration. Then the Head of State used this vehicle for his arrival at the 73rd Session of the General Assembly of the United Nations. 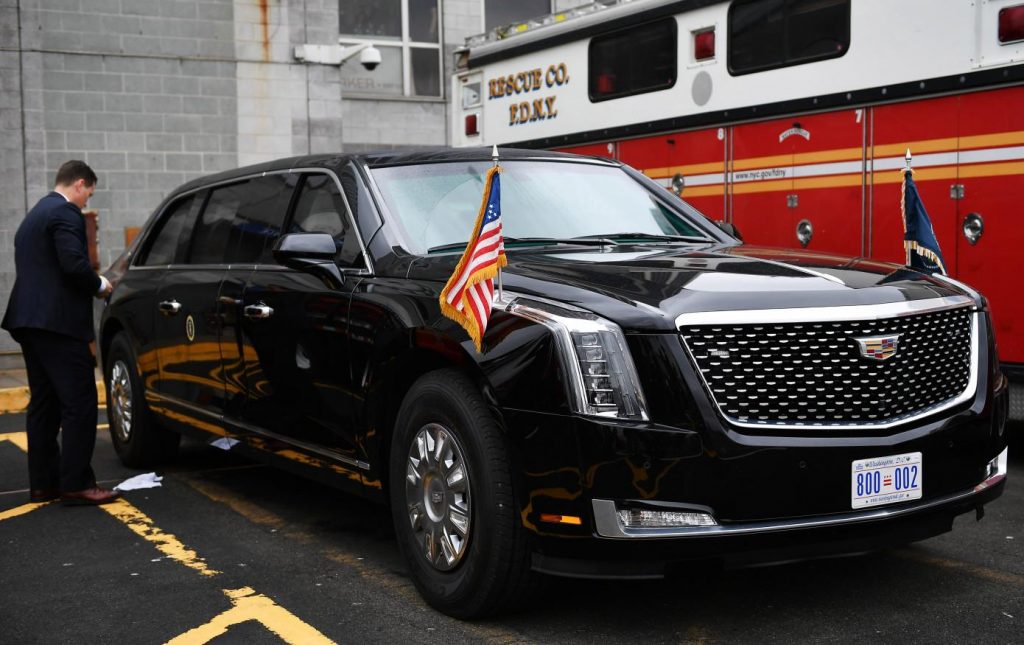 The new “Beast” is once again work of the company Cadillac that is owned by General Motors, and is part of a special state order at a price of more than 15 million US dollars, for a new generation of government armored vehicles.

The design of the car looks very similar to those of the previous year 2009, which has served faithfully the President Obama during his two mandates, but the manufacturer declares that regarding the new design, we are speaking of a completely new level of protection.

Most of the details are secret, but we know that the limousine that weights nearly 9 tons, is able to withstand shots, bomb attacks, chemical weapons and it is even supplied with blood of the blood type of the President in case of need.

For the ceremony for his 4th mandate in May 2018, the Russian President Vladimir Putin arrived with the Aurus Senat limousine, developed by the automotive institute NAMI in Moscow for a period of 5 years. 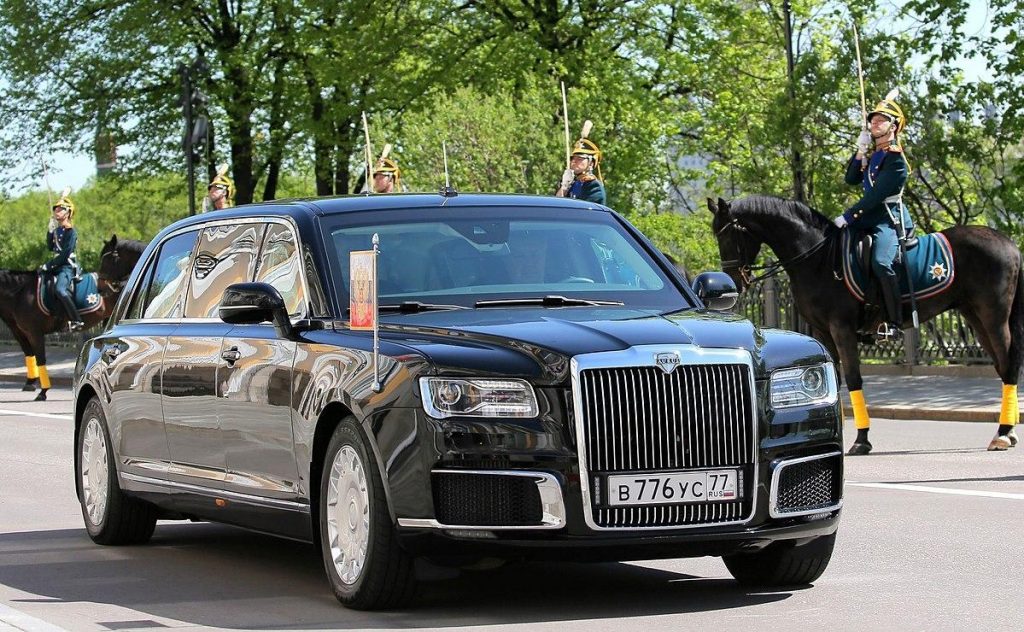 The luxury car replaced Mercedes-Benz S 600 Guard Pullman used during the previous mandate. Weighting over 6 tons Senat is powered by a special turbo 4.4-liter V8 engine, 9-speed automatic gearbox, and it is equipped with the latest security systems.

The civilian version of the car is coming soon as the expected cost of the vehicle is 10 million rubles ($160,000) as part of the “Cortege” project, which will include a sedan, minivan and off-road vehicle.

Traditionally, since the 1960s the leaders of China often use limousines of the luxury brand Hongqi at official events. The name means “red flag” and symbolizes communism. 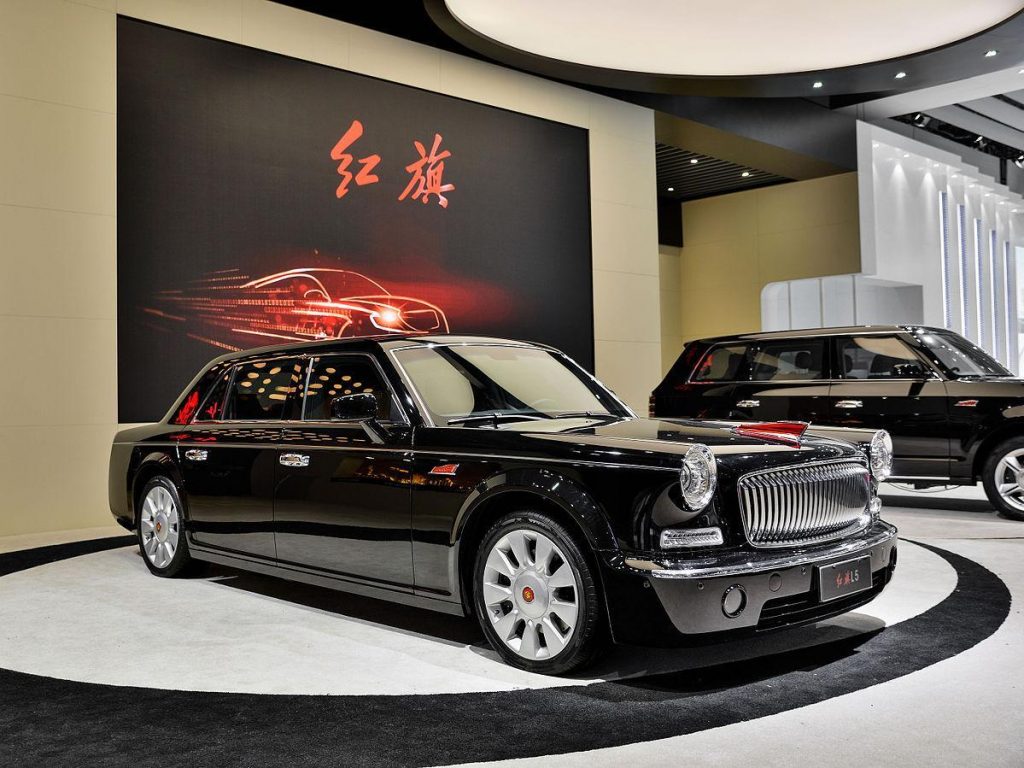 Xi Jinping, the Secretary–General of the Chinese Communist Party,rides in the ultra-luxurious Hongqi L5 – newer version of Hongqi CA770 from 1963. Under the cover of the new model lies apowerful 6-liter V-engine with 12 cylinders, and the gearbox is 6-speed and automatic.

Shown for the first time at the automotive exhibition in Shanghai in 2013, and officially in production since 2014 at a price of 5 million Chinese Yuan ($800,000), Hongqi L5 is considered to be the most expensive car ever produced in China.

The Emperor of Japan uses a custom-made Toyota Century Royal, a unique version of the model at a price of 52,500,000 Japanese Yen ($500,000). Designed specifically for members of the imperial family, this car has interior upholstery made of wool and Japanese rice paper, granite steps, as well as a number of secret security measures. 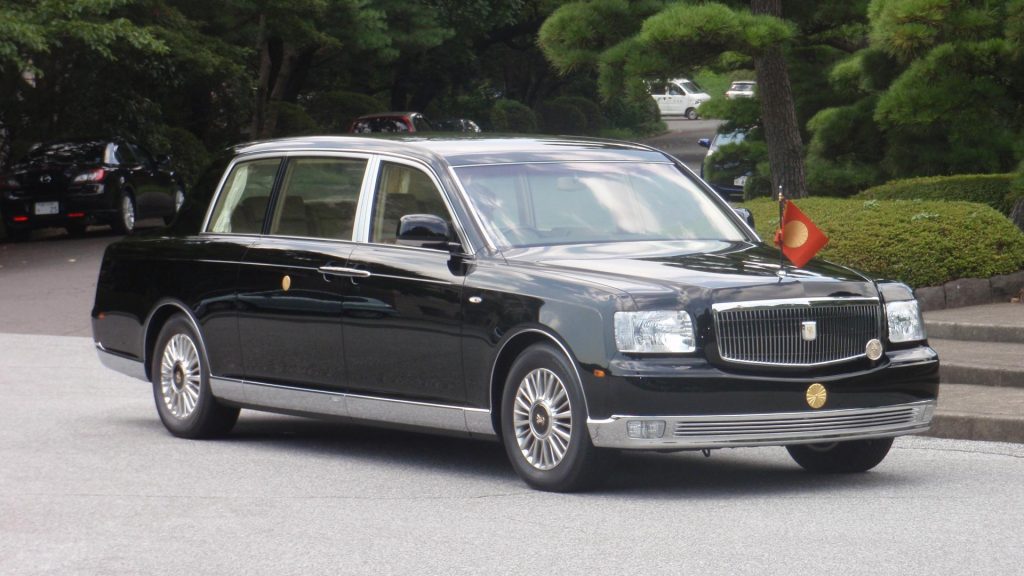 In 2006,5 cars in total were ordered with different variations and price, but because of the high price only 4 cars were created. The new fleet of armored cars is replacing the four 40-year old limousines Nissan Prince Royal that have been used to that moment.

The first one is called Empress 1 and it serves the imperial palace. This car is followed by Empress 2 in 2008, which is modified as a hearse and it was used for the funeral of prince Mikasa on October 27th, 2016. Empress 3 and Empress 5 are at the disposal of the Ministry of Foreign Affairs, they are equipped with additional levels of protection, as their price reaches 851,445 US dollars. The name Empress 4 was not used because in the East the number 4 is equivalent to the number 13 in the West, so it is considered a very bad omen.

Toyota Century Royal (G51) Empress 1 weights approximately 3 tons and is powered by 5-liter V12 engine and 6 speed automatic gear-box. When the Emperor travels in this car, the Imperial Flag is attached to the top of the grid.In the place of the registration number is placed the circular symbol known as the “Imperial seal of Japan“, and on the back passenger doors is placed a 16-leaf golden chrysanthemum,symbolizing the Chrysanthemum throne of the country.

On the occasion of the 50th anniversary from the inauguration of Queen Elizabeth IIin 2002, the British brand Bentley produced only two limited-edition cars called Bentley State Limousine. Both cars are exposed in the Buckingham palace when they are not used. 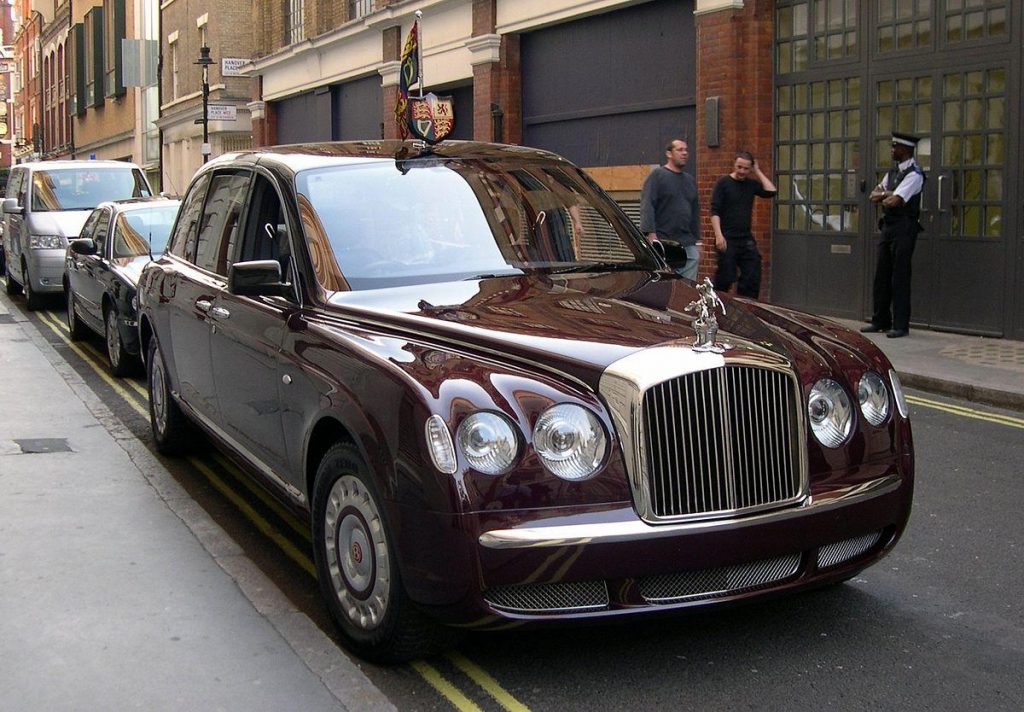 The model is based onArnage R-version but has been modified in almost any aspect. In addition to the bigger overall dimensions, the engine is 6.75-liter V8 with double turbo and 400 horse-power. The maximum speed developed by the armored vehicle with Kevlar-reinforced tires is 209 km/h.

When the queen is riding in this car, her personal talisman is placed on the front cover, which depicts St. George who kills the dragon.

The garage of the French presidential institution includes armored versions of luxury cars such as Citroën C6, Citroën DS5 Hybrid4, Renault VelSatis and Peugeot 607. The common practice of the automotive manufacturers in France is to provide various opportunities, so each President to be able to choose the car that best fits his preferences.  While the Presidents Nicola Sarkozy and Francois Hollande often travelled in Citroen, Jacques Chirac was a fan of Renault. 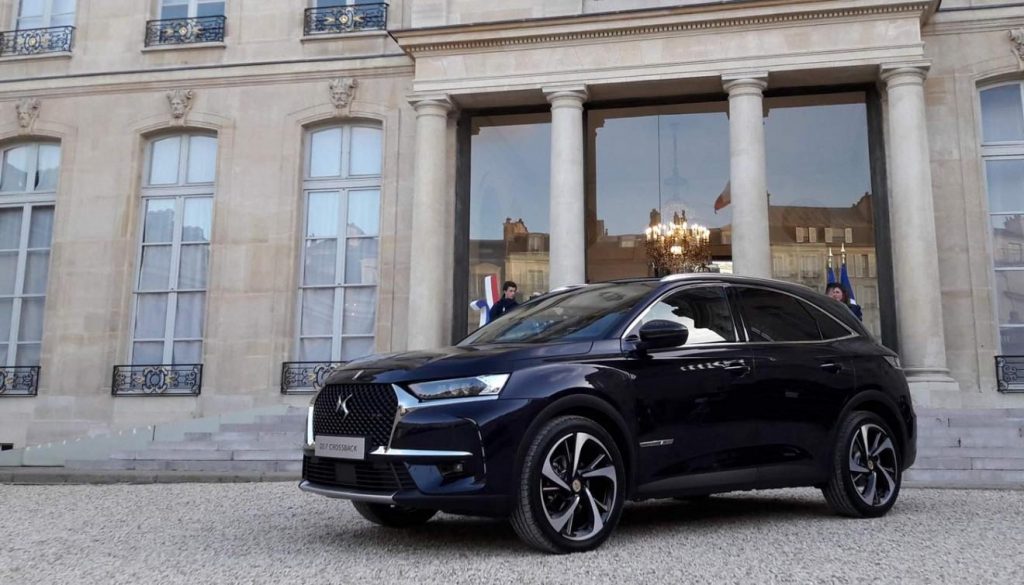 Undoubtedly, the most legendary French vehicle related to a head of a State is Citroen DS. Thanks to the unique ability to move on three wheels and with several flat tires, this car also has a role in the rescuing of Charles de Gaulle from the attack attempts, screened also in the famous movie “Day of the Jackal”.

Upon his inauguration,Emmanuel Macron used DS 7 Crossback, a luxury SUV from DS Automobiles. For subsequent events he can be spotted in armored Peugeot 5008 or Renault Espace.

Over the years the important German political figures most of the time have used models from the S-class of Mercedes-Benz, as the most famous ones are of the series 300 – Adenauer and the long Pullman base. The protection of the Federal President during a ride is entrusted to the armored version of Mercedes-Benz W221 or Audi A8, bearing the distinctive flag on the front cover. 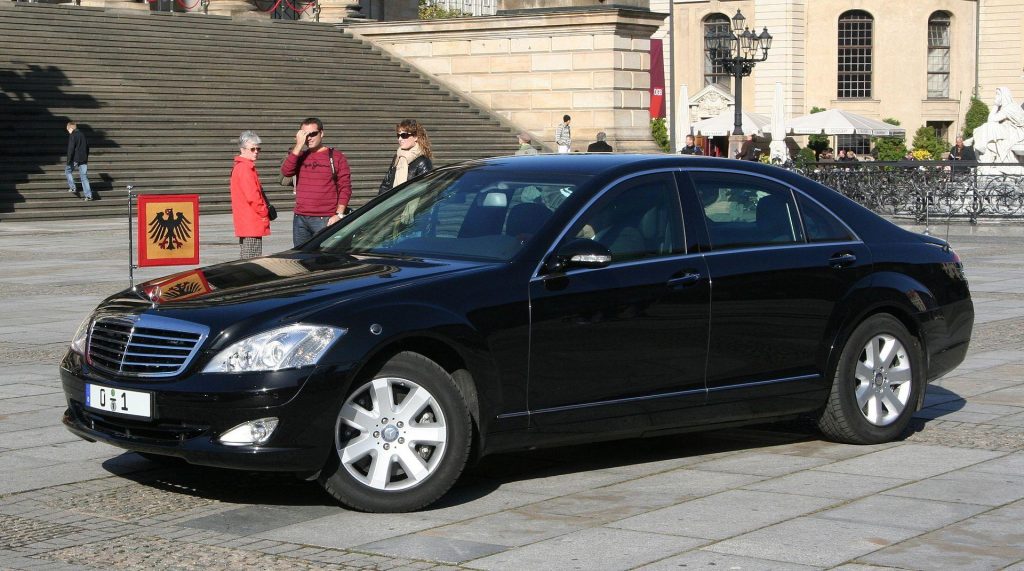 Some politicians prefer to use cars according to the different regions of the country. For example, in Bavaria you will notice more frequent use of the brand BMW based in Munich, as it is used more than Mercedes. The Green Party uses mostly Audi or Volkswagen, while the Chancellor Merkel is famous for the fact that she uses all German brands and she is neutral and not popularizing the German automotive industry in general.

When Queen Elizabeth announced her upcoming visit to Italyin 1960, the President Giovanni Gronchi authorized Pininfarina to supply four limousines Lancia Flaminia specifically on the occasion of the visit, as well as to make impression with these cars in the fleet of the President. 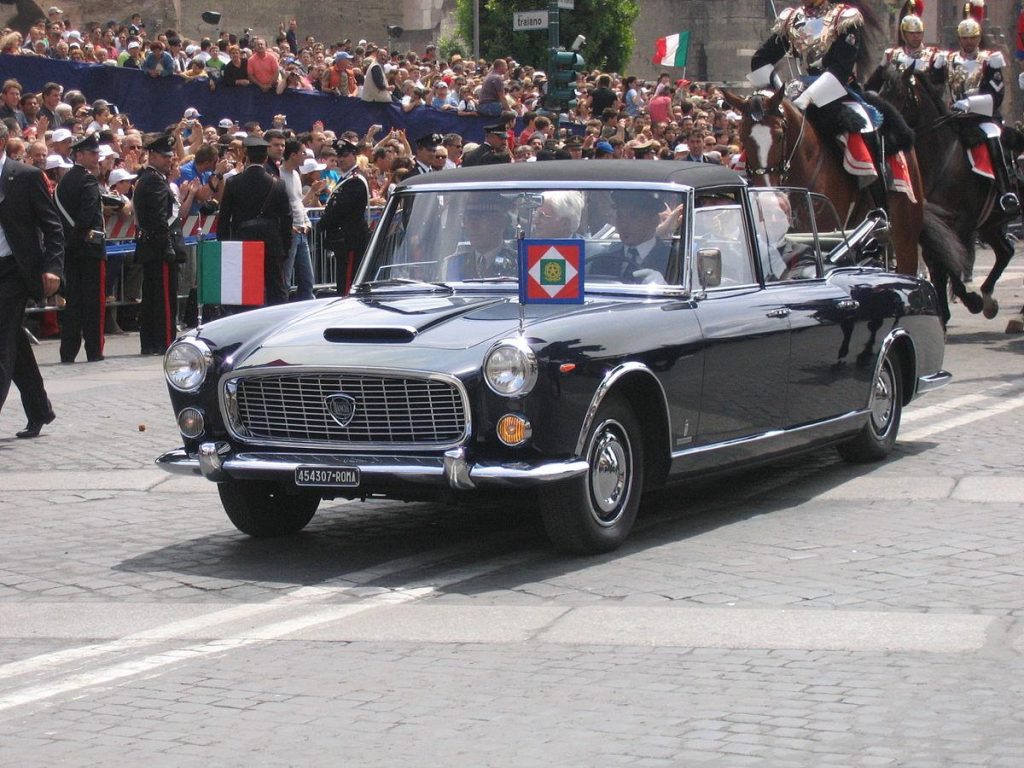 The cars were manufactured between 1960 and 1961 for a record-breaking period of time – 6 months, with the help of General Motors with regard to some extras. They are 7-seat landaulets in dark blue color with an interior from Connolly Leather, radio Voxson and tiers Pirelli. The official name of the model is Flaminia 335, because of the distance between front and back wheels of 335 cm, often called just “Presidenziale”. Each one of the four vehicles has a separate name – Belsito, Belmonte, Belvedere andBelfiore.

All four cars survived to the present day, as in 2001 they were renewed by Fiat Auto. Two of them were donated to the automotive museums in the country, and the other two are still at the disposal of the President for special events, such as national celebrations or inauguration.

The current President Sergio Matarella uses two identical armored Lancia Thesis, and he also has a third civil model as a reserve. Upon visit of a foreign Presidents, the Italian country offers the limousine Lancia Thesis Stola S85 and three versions of Maserati Quattroporte.

The garage of the presidential institution includes many other interesting vehicles, including Alfa Romeo 159 and 166, Bentley Continental Flying Spur, Audi A6 and A8, BMW 5-а and 7-а series, Mercedes-Benz W212 and W221, Lancia Thesis and LanciaThema, Maserati Quattroporte V and VI.